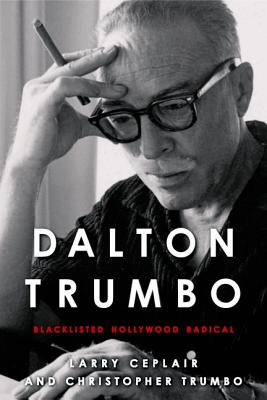 James Dalton Trumbo (1905--1976) is widely recognized for his work as a screenwriter, playwright, and author, but he is also remembered as one of the Hollywood Ten who opposed the House Un-American Activities Committee. Refusing to answer questions about his prior involvement with the Communist Party, Trumbo sacrificed a successful career in Hollywood to stand up for his rights and defend political freedom.

In Dalton Trumbo, authors Larry Ceplair and Christopher Trumbo present their extensive research on the famed writer, detailing his work, his membership in the Communist Party, his long campaign against censorship during the domestic cold war, his ten-month prison sentence for contempt of Congress, and his thirteen-year struggle to break the blacklist.

The blacklist ended for Trumbo in 1960, when he received screen credits for Exodus and Spartacus. Just before his death, he received a long-delayed Academy Award for The Brave One, and in 1993, he was posthumously given an Academy Award for Roman Holiday (1953). This comprehensive biography provides insights into the many notable people with whom Trumbo worked, including Stanley Kubrick, Otto Preminger, and Kirk Douglas, and offers a fascinating look at the life of one of Hollywood's most prominent screenwriters and his battle against persecution.

Larry Ceplair is the author of The Marxist and the Movies: A Biography of Paul Jarrico and Anti-Communism in Twentieth-Century America: A Critical History.Christopher Trumbo (1940--2011), the son of Dalton and Cleo Trumbo, was a television writer, screenwriter, and author of the play Trumbo: Red, White and Blacklisted.
Loading...
or
Not Currently Available for Direct Purchase