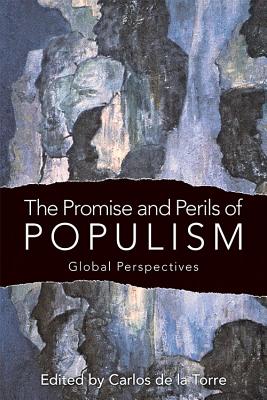 The Promise and Perils of Populism

From the protesters in Cairo's Tahrir Square to the Tea Party in the United States to the campaign to elect indigenous leader Evo Morales in Bolivia, modern populist movements command international attention and compel political and social change. When citizens demand "power to the people," they evoke corrupt politicians, imperialists, or oligarchies that have appropriated power from its legitimate owners. These stereotypical narratives belie the vague and often contradictory definitions of the concept of "the people" and the many motives of those who use populism as a political tool.

In The Promise and Perils of Populism, Carlos de la Torre assembles a group of international scholars to explore the ambiguous meanings and profound implications of grassroots movements across the globe. These trenchant essays explore how fragile political institutions allow populists to achieve power, while strong institutions confine them to the margins of political systems. Their comparative case studies illuminate how Latin American, African, and Thai populists have sought to empower marginalized groups of people, while similar groups in Australia, Europe, and the United States often exclude people whom they consider to possess different cultural values. While analyzing insurrections in Latin America, advocacy groups in the United States, Europe, and Australia, and populist parties in Asia and Africa, the contributors also pose questions and agendas for further research.

This volume on contemporary populism from a comparative perspective could not be more timely, and scholars from a variety of disciplines will find it an invaluable contribution to the literature.

Carlos de la Torre is director of international studies and professor of sociology at the University of Kentucky. He is the author or editor of several books, including Latin American Populism in the Twenty-First Century, Populist Seduction in Latin America, and The Ecuador Reader: History, Culture, Politics.
Loading...
or support indie stores by buying on