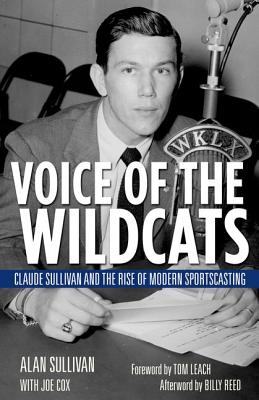 Voice of the Wildcats

Claude Sullivan and the Rise of Modern Sportscasting

As one of the first voices of the University of Kentucky men's basketball program, Claude Sullivan (1924-1967) became a nationally known sportscasting pioneer. His career followed Kentucky's rise to prominence as he announced the first four NCAA championship titles under Coach Adolph Rupp and covered scrimmages during the canceled 1952-1953 season following the NCAA sanctions scandal. Sullivan also revolutionized the coverage of the UK football program with the introduction of a coach's show wit.

Alan Sullivan is the son of Claude Sullivan and began working in the family broadcasting business, Sullivan Enterprises, at age eleven, assisting with the production of Kentucky basketball and football games. He managed the restoration of the Claude Sullivan Collection at the UK Archives and is a UK Fellow and former member of the UK Library National Advisory Board. Joe Cox is an attorney and is the author or coauthor of ten books, including 100 Things Wildcats Fans Should Know & Do Before They Die.
Loading...
or support indie stores by buying on