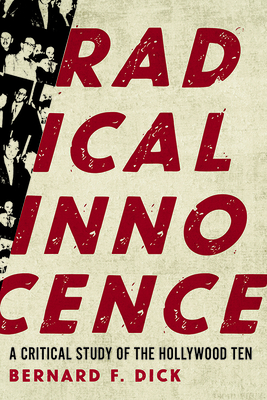 A Critical Study of the Hollywood Ten

On October 30, 1947, the House Committee on Un-American Activities concluded the first round of hearings on the alleged Communist infiltration of the motion picture industry. Hollywood was ordered to "clean its own house," and ten witnesses who had refused to answer questions about their membership in the Screen Writers Guild and the Communist party eventually received contempt citations. By 1950, the Hollywood Ten (as they quickly became known), which included writers, directors, and a producer, were serving prison sentences ranging from six months to one year. Since that time, the members of the Hollywood Ten have been either dismissed as industry hacks or eulogized as Cold War martyrs, but never have they been discussed in terms of their professions.

Radical Innocence: A Critical Study of the Hollywood Ten is the first study to focus on the work of the Ten: their short stories, plays, novels, criticisms, poems, memoirs, and, of course, their films. Drawing on myriad sources, including archival materials, unpublished manuscripts, black market scripts, screenplay drafts, letters, and personal interviews, Bernard F. Dick describes the Ten's survival tactics during the blacklisting and analyzes the contributions of these ten individuals not only to film but also to the arts. Radical Innocence captures the personality of each of the Ten, including the arrogant Herbert J. Biberman, the witty Ring Lardner Jr., the patriarchal Samuel Ornitz, the compassionate Adrian Scott, and the feisty Dalton Trumbo.

Bernard F. Dick is professor emeritus of communications and English at Fairleigh Dickinson University (Teaneck campus). He holds a doctorate in classics from Fordham University and is the author of numerous film books including Anatomy of Film, Hal Wallis, and That Was Entertainment.
Loading...
or support indie stores by buying on