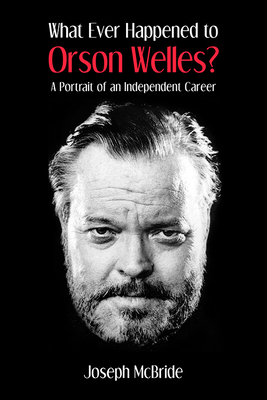 What Ever Happened to Orson Welles?

In this intimate and often surprising personal portrait, Joseph McBride challenges the conventional wisdom that Welles's career after Citizen Kane, widely regarded as the greatest film ever made, fell into a long decline. The author shows instead how Welles never stopped directing radical, adventurous films and was always breaking new artistic ground as a filmmaker. McBride is the first author to provide a comprehensive examination of the films of Welles's artistically rich yet widely misunderstood later period in the United States (1970--1985), when McBride knew the director and worked with him as an actor. To put Welles's later years into context, the author reexamines the filmmaker's entire life and career. This newly updated edition rounds out the story with a final chapter analyzing The Other Side of the Wind, finally completed in 2018 -- Welles's personal testament on filmmaking -- and his rediscovered 1938 film, Too Much Johnson. McBride offers many fresh insights into the collapse of Welles's Hollywood career in the 1940s, his subsequent political blacklisting, and his long period of European exile.

An enlightening and entertaining look at Welles's brilliant and enigmatic career as a filmmaker, What Ever Happened to Orson Welles? serves as a major reinterpretation of Welles's life and work. McBride's revealing portrait of this great artist changes the framework for how Orson Welles is understood as a man, an actor, a political figure, and a filmmaker.

Joseph McBride is the author of twenty-two books, including acclaimed biographies of Frank Capra, John Ford, and Steven Spielberg, two other books on Welles, and critical studies of Ernst Lubitsch and Billy Wilder. A former reporter, reviewer, and columnist for Daily Variety in Hollywood, McBride is a professor in the School of Cinema at San Francisco State University.
Loading...
or support indie stores by buying on