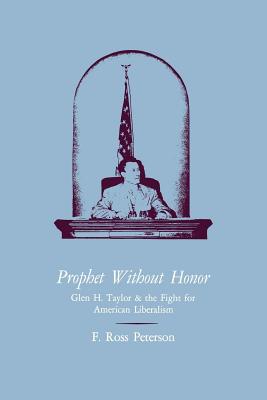 Glen H. Taylor and the Fight for American Liberalism

Glen Taylor's colorful political career, which ran its course from 1944 to 1956, saw him rise from a barnstorming musician to candidate for the vice-presidency of the United States on the 1948 Progressive party ticket. In this illuminating study, Mr. Peterson delineates the life and public career of this man who, though relatively unknown, articulated and fought for many of the policies that later became widely accepted by the American people-policies such as equal civil rights on the domestic front and the application of cooperation rather than containment on the foreign front. Taylor, a dedicated liberal and humanitarian, was devoted to such ideological causes to which, in part at least, he sacrificed his political future, when he refused to abandon them when they became unpopular.

Elected to the United States Senate from Idaho on the Democratic ticket in 1944, Taylor became convinced that the social, economic, and political problems facing the country in the postwar period, such as unemployment, inadequate housing, and spiraling inflation, demanded a rapid renewal of the New Deal. He saw the role of the federal government as the initiator of reforms and the guarantor of individual rights.

In the area of foreign policy Taylor earned for himself the label of "maverick liberal" by opposing the Truman administration's foreign policy. He criticized the Truman Doctrine, the Marshall Plan, and NATO as contributing to the Cold War. In the span of years that saw the rise of Joseph McCarthy, Taylor vigorously articulated his conviction that the United States and the Soviet Union not only should share the responsibility for troubled world conditions but should work together for a peaceful solution. For this stand many of Taylor's contemporaries categorized him as a Communist dupe. Of little more popular appeal in postwar America was Taylor's strong belief in civil rights, particularly as it related to black Americans-even at one time finding himself under arrest in Alabama for attempting to enter a segregated black church.

In providing the details here of the career of this maverick figure in American politics, Mr. Peterson portrays a life that not only demonstrates the hallowed right to dissent but also dramatically proves that many persons discredited by their contemporaries contributed substantially to a quality life for all Americans.

F. Ross Peterson is assistant professor of history at Utah State University.
Loading...
or
Not Currently Available for Direct Purchase