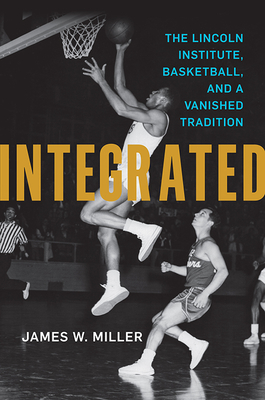 The Lincoln Institute, Basketball, and a Vanished Tradition

In Integrated, James W. Miller explores an often ignored aspect of America's struggle for racial equality. He relates the story of the Lincoln Institute -- an all-black high school in Shelby County, Kentucky, where students prospered both in the classroom and on the court. In 1960, the Lincoln Tigers men's basketball team defeated three all-white schools to win the regional tournament and advance to one of Kentucky's most popular events, the state high school basketball tournament. This proud tradition of African American schools -- a celebration of their athletic achievements -- was ironically destroyed by integration.

This evocative book is enriched by tales of individual courage from men who defied comfort and custom. Miller describes how one coach at a white high school convinced his administrators and fans that playing the black schools was not only the right thing to do, but that it was also necessary. He discusses John Norman "Slam Bam" Cunningham, the former Lincoln Institute standout who became an Armed Forces All-Star and later impressed University of Kentucky Coach Adolph Rupp on the Wildcats' home floor. Miller also tells the story of a young tennis prodigy whose dreams were denied because he could not play at the white country club, but who became the first African American to start for an integrated Kentucky high school basketball championship team.

Featuring accounts from former Lincoln Institute players, students, and teachers, Integrated not only documents the story of a fractured sports tradition but also addresses the far-reaching impact of the civil rights movement in the South.

James W. Miller is the retired athletics director at the University of New Orleans. Prior to his tenure there, he spent eleven years as a newspaper reporter and twenty-one years in the NFL, where he held positions with the New Orleans Saints, Buffalo Bills, and Chicago Bears. He is the author of Where the Water Kept Rising.
Loading...
or support indie stores by buying on