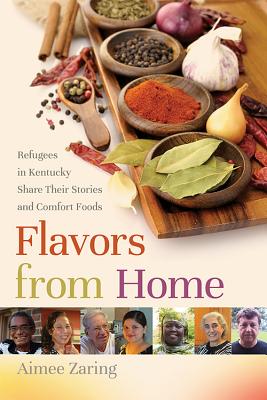 Refugees in Kentucky Share Their Stories and Comfort Foods

Each year, the United States legally resettles tens of thousands of refugees who have fled their homelands. Refugees, unlike economic migrants, are forced to leave their countries of origin or are driven out by violence or persecution. As these individuals and their families struggle to adapt to a new culture, the kitchen often becomes one of the few places where they are able to return "home." Preparing native cuisine is one way they can find comfort in an unfamiliar land, retain their customs, reconnect with their past, and preserve a sense of identity.

In Flavors from Home, Aimee Zaring shares fascinating and moving stories of courage, perseverance, and self-reinvention from Kentucky's resettled refugees. Each chapter features a different person or family and includes carefully selected recipes. These traditional dishes have nourished both body and soul for people like Huong "CoCo" Tran, who fled South Vietnam in 1975 when Communist troops invaded Saigon, or Kamala Pati Subedi, who was stripped of his citizenship and forced out of Bhutan because of political and religious persecution.

Whether shared at farmers' markets, restaurants, community festivals, or simply among friends and neighbors, these native dishes contribute to the ongoing evolution of American comfort food just as the refugees themselves are redefining what it means to be American. Featuring more than forty recipes from around the globe, Flavors from Home reaches across the table to explore the universal language of food.

Aimee Zaring has taught ESOL (English for Speakers of Other Languages) to refugees and immigrants through Catholic Charities Migration and Refugee Services, Kentucky Refugee Ministries, Global LT, Inc., and Jefferson County Public Schools. Her writing has appeared in Arts Across Kentucky, Edible Louisville, New Southerner, Louisville Courier-Journal, The Rumpus, and other publications.
Loading...
or
Not Currently Available for Direct Purchase