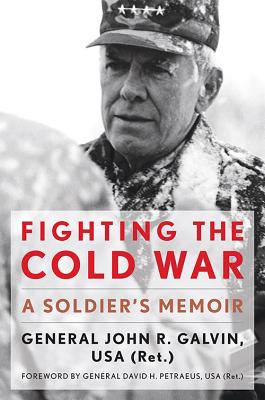 When four-star general John Rogers Galvin retired from the US Army after forty-four years of distinguished service in 1992, the Washington Post hailed him as a man ""without peer among living generals."" In Fighting the Cold War: A Soldier's Memoir, the celebrated soldier, scholar, and statesman recounts his active participation in more than sixty years of international history-from the onset of World War II through the fall of the Berlin Wall and the post-Cold War era. Galvin's illustrious tenur.

General John R. Galvin, USA (Ret.), was dean of the Fletcher School of Law and Diplomacy at Tufts University and is the author of The Minute Men: The First Fight: Myths and Realities of the American Revolution ; Air Assault: the Development of Airmobile Warfare ; and Three Men of Boston: Leadership and Conflict at the Start of the American Revolution. He has received numerous awards, including the Legion of Merit and the Army Distinguished Service Medal.
Loading...
or support indie stores by buying on