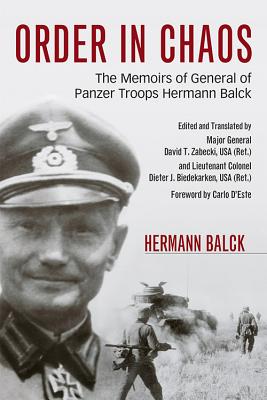 German general Hermann Balck (1897-1982) was considered to be one of World War II's greatest battlefield commanders. His brilliantly fought battles were masterpieces of tactical agility, mobile counterattack, and the technique of Auftragstaktik, or ""mission command."" However, because he declined to participate in the U.S. Army's military history debriefing program, today he is known only to serious students of the war. Drawing heavily on his meticulously kept wartime journals, Balck discusses h.

Major General David T. Zabecki, USA (Ret.), is the author or editor of many books, including the four-volume encyclopedia Germany at War: 400 Years of Military History. He is an honorary senior research fellow in the War Studies Programme at the University of Birmingham, United Kingdom.Lieutenant Colonel Dieter J. Biederkarken, USA (Ret.), was born and raised in Germany. He attended college in the United States and became an American citizen and a U.S. Army officer.
Loading...
or support indie stores by buying on