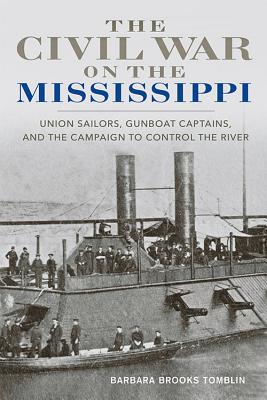 The Civil War on the Mississippi

Union Sailors, Gunboat Captains, and the Campaign to Control the River

Flowing from its source in northern Minnesota to the Gulf of Mexico, the Mississippi River borders or passes through ten different states and serves as one of the most important transportation systems in the United States. During the Civil War, both sides believed that whoever controlled the river would ultimately be victorious. Cotton exports generated much-needed revenue for the Confederacy, and the Mississippi was also the main conduit for the delivery of materials and food. Similarly, the Union sought to maintain safe passage from St. Louis, Missouri, to Cairo, Illinois, but also worked to bisect the South by seizing the river as part of the Anaconda Plan.

Drawing heavily on the diaries and letters of officers and common sailors, Barbara Brooks Tomblin explores the years during which the Union navy fought to win control of the Mississippi. Her approach provides fresh insight into major battles such as Memphis and Vicksburg, but also offers fascinating perspectives on lesser-known aspects of the conflict from ordinary sailors engaged in brown-water warfare. These men speak of going ashore in foraging parties, assisting the surgeon in the amputation of a fellow crewman's arm, and liberating supplies of whiskey from captured enemy vessels. They also offer candid assessments of their commanding officers, observations of the local people living along the river, and their views on the war. The Civil War on the Mississippi not only provides readers with a comprehensive and vivid account of the action on the western rivers; it also offers an incredible synthesis of first-person accounts from the front lines.

Barbara Brooks Tomblin is a naval historian and the author of numerous articles and books, including G.I. Nightingales: The Army Nurse Corps in World War II and Bluejackets and Contrabands: African Americans and the Union Navy.
Loading...
or support indie stores by buying on