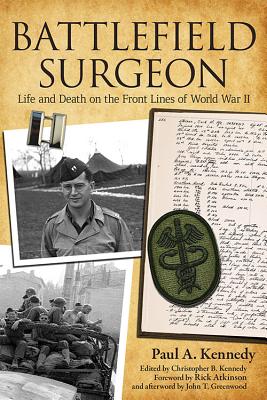 In November 1942, Paul Andrew Kennedy (1912--1993) boarded the St. Elena in New York Harbor and sailed for Casablanca as part of Operation Torch, the massive Allied invasion of North Africa. As a member of the US Army's 2nd Auxiliary Surgical Group, he spent the next thirty-four months working in North Africa, Italy, France, and Germany, in close proximity to the front lines and often under air or artillery bombardment. He was uncomfortable, struck by the sorrows of war, and homesick for his wife, for whom he kept detailed diaries to ease his unrelenting loneliness.

In Battlefield Surgeon , Kennedy's son Christopher has edited his father's journals and provided historical context to produce an invaluable personal chronicle. What emerges is a vivid record of the experiences of a medical officer in the European theater of operations in World War II. Kennedy participated in some of the fiercest action of the war, including Operation Avalanche, the attack on Anzio, and Operation Dragoon. He also arrived in Rome the day after the Allied troops, and entered the Dachau concentration camp two days after it was liberated.

Despite the enormous success of the popular M*A*S*H franchise, there are still surprisingly few authentic accounts of military doctors and medical practice during wartime. As a young, inexperienced surgeon, Kennedy grappled with cases much more serious and complex than he had ever faced in civilian practice. Featuring a foreword by Pulitzer Prize--winning World War II historian Rick Atkinson and an afterword by U.S. Army medical historian John T. Greenwood, this remarkable firsthand account offers an essential perspective on the Second World War.

Christopher B. Kennedy is senior deputy director of athletics and adjunct assistant professor of English at Duke University. He also teaches in Duke's Kenan Institute for Ethics.
Loading...
or
Not Currently Available for Direct Purchase