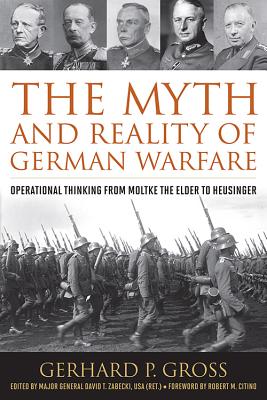 The Myth and Reality of German Warfare

Surrounded by potential adversaries, nineteenth-century Prussia and twentieth-century Germany faced the formidable prospect of multifront wars and wars of attrition. To counteract these threats, generations of general staff officers were educated in operational thinking, the main tenets of which were extremely influential on military planning across the globe and were adopted by American and Soviet armies. In the twentieth century, Germany's art of warfare dominated military theory and practice, creating a myth of German operational brilliance that lingers today, despite the nation's crushing defeats in two world wars.

In this seminal study, Gerhard P. Gross provides a comprehensive examination of the development and failure of German operational thinking over a period of more than a century. He analyzes the strengths and weaknesses of five different armies, from the mid--nineteenth century through the early days of NATO. He also offers fresh interpretations of towering figures of German military history, including Moltke the Elder, Alfred von Schlieffen, and Erich Ludendorff. Essential reading for military historians and strategists, this innovative work dismantles cherished myths and offers new insights into Germany's failed attempts to become a global power through military means.

Colonel Gerhard P. Gross, Bundeswehr, head of the Department of German Military History before 1945 at the Bundeswehr Center of Military History and Social Sciences in Potsdam, Germany, is the author of numerous books and coeditor of The Schlieffen Plan: International Perspectives on the German Strategy for World War I.Major General David T. Zabecki, USA (Ret.), is the author of The German 1918 Offensives: A Case Study in the Operational Level of War and editor in chief of the award-winning four-volume encyclopedia Germany at War: 400 Years of Military History. He is an honorary senior research fellow in the War Studies Programme at the University of Birmingham, United Kingdom.
Loading...
or
Not Currently Available for Direct Purchase