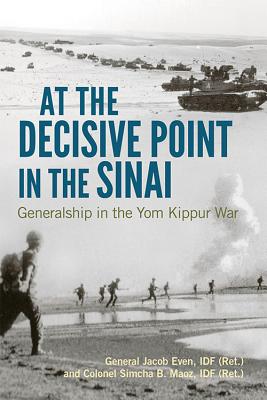 At the Decisive Point in the Sinai

Jacob Even, Simcha B. Maoz

The Yom Kippur War pitted Israel against Syria in the north and Egypt in the south in October 1973. Caught by surprise and surrounded by enemies, Israel relied on the flexibility and creative thinking of its senior field commanders. After Israeli forces halted the Egyptian troops on the Sinai Peninsula, Major General Ariel Sharon seized the opportunity to counterattack. He split the Egyptian army and cut off its supply lines in a maneuver known as Operation Stouthearted Men. Sharon's audaciou.

General Jacob Even, IDF (Ret.), led armored units at all levels and served as both division commander and IDF National Defense College commander. Colonel Simcha B. Maoz, IDF (Ret.), held staff and instruction positions in the infantry and paratroops command before being assigned to the General Staff.
Loading...
or support indie stores by buying on