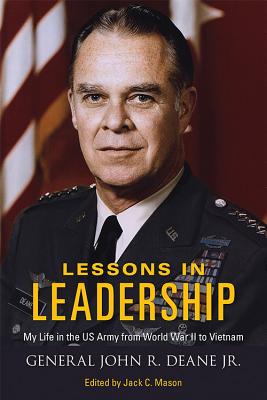 John R. Deane Jr. (1919--2013) was born with all the advantages a man needs to succeed in a career in the US Army, and he capitalized on his many opportunities in spectacular fashion. The son of one of George C. Marshall's closest assistants, Deane graduated from West Point with the first class of World War II and served in combat under the dynamic General Terry de la Mesa Allen Sr. After the war, he led a German espionage unit in operations against the Soviets, personally led the first foot patrol following the course of the Berlin Wall as it was being constructed, participated in the 1965 Dominican Republic intervention, and saw combat in Vietnam. In 1975, he received his fourth star and became commander of the US Army Materiel Development and Readiness Command.

In Lessons in Leadership, this exceptional soldier not only discusses working with some of the army's most influential and colorful leaders -- including James M. Gavin, William E. DePuy, William Westmoreland, and Creighton Abrams Jr. -- but also the many junior officers who helped him develop the leadership skills for which he became well known. Throughout, he offers eyewitness accounts of key Cold War--era events as well as wise observations concerning the leadership and management challenges facing the Department of Defense. Ably edited and annotated by Jack C. Mason, Deane's illuminating memoir also features interviews with several of Deane's contemporaries, whose comments and recollections are interspersed to provide depth and context to the narrative.

Jack C. Mason is a former Department of Army civilian and retired as a colonel in the US Army Reserve. He is a member of the US Army Officer Candidate School Hall of Fame. In 2009, he won the Army Historical Foundation Distinguished Writing Award for his book, Until Antietam: The Life and Letters of Major General Israel B. Richardson.
Loading...
or
Not Currently Available for Direct Purchase