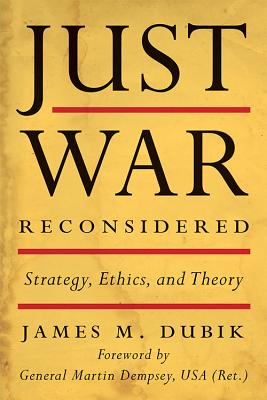 In the seminal Just and Unjust Wars, Michael Walzer famously considered the ethics of modern warfare, examining the moral issues that arise before, during, and after conflict. However, Walzer and subsequent scholars have often limited their analyses of the ethics of combat to soldiers on the ground and failed to recognize the moral responsibilities of senior political and military leaders.

In Just War Reconsidered: Strategy, Ethics, and Theory, James M. Dubik draws on years of research as well as his own experiences as a soldier and teacher to fill the gaps left by other theorists. He applies moral philosophy, political philosophy, and strategic studies to historical and contemporary case studies to reveal the inaccuracies and moral bankruptcy that inform some of the literature on military ethics. Conventional just war theory adopts a binary approach, wherein political leaders have moral accountability for the decision to go to war and soldiers have accountability for fighting the war ethically. Dubik argues, however, that political and military leadership should be held accountable for the planning and execution of war in addition to the decision to initiate conflict.

Dubik bases his sober reassessment on the fundamental truth that war risks the lives of soldiers and innocents as well as the political and social health of communities. He offers new standards to evaluate the ethics of warfare in the hope of increasing the probability that the lives of soldiers will not be used in vain and the innocent not put at risk unnecessarily.

Lt. General James M. Dubik, USA (Ret.), is Professor of the Practice and Director of Teaching at Georgetown University's Security Studies Program. He held the Omar Bradley Chair of Strategic Leadership from 2012 to 2013, a position cosponsored by Dickinson College, Penn State Law School, and the U.S. Army War College. He is coauthor of Envisioning Future Warfare.
Loading...
or support indie stores by buying on