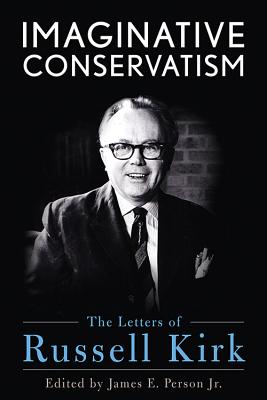 The Letters of Russell Kirk

Russell Kirk (1918--1994) is renowned worldwide as one of the founders of postwar American conservatism. His 1953 masterpiece, The Conservative Mind, became the intellectual touchstone for a reinvigorated movement and began a sea change in the nation's attitudes toward traditionalism. A prolific author and wise cultural critic, Kirk kept up a steady stream of correspondence with friends and colleagues around the globe, yet none of his substantial body of personal letters has ever been published -- letters as colorful and intelligent as the man himself.

In Imaginative Conservatism, James E. Person Jr. presents one hundred and ninety of Kirk's most provocative and insightful missives. Covering a period from 1940 to 1994, these letters trace Kirk's development from a shy, precocious young man to a public intellectual firm in his beliefs and generous with his time and resources when called upon to provide for refugees, the homeless, and other outcasts. This carefully annotated and edited collection includes correspondence between Kirk and figures such as T.S. Eliot, William F. Buckley Jr., Ray Bradbury, Arthur Schlesinger Jr., Charlton Heston, Nikolai Tolstoy, Wendell Berry, Richard Nixon, and Herbert Hoover, among many others.

Kirk's conservatism was not primarily political but moral and imaginative, focusing always on the relationship of the human soul in community with others and with the transcendent. Beyond the wealth of autobiographical information that this collection affords, it offers thought-provoking wisdom from one of the twentieth century's most influential interpreters of American politics and culture.

James E. Person Jr. is a senior fellow at the Russell Kirk Center for Cultural Renewal. He is the author of Earl Hamner: From Walton's Mountain to Tomorrow and Russell Kirk: A Critical Biography of a Conservative Mind.
Loading...
or
Not Currently Available for Direct Purchase