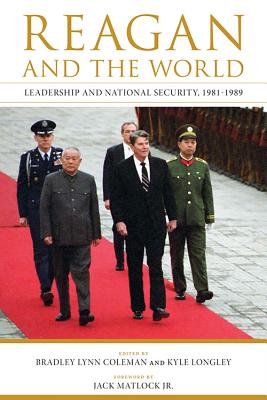 Reagan and the World

Throughout his presidency, Ronald Reagan sought "peace through strength" during an era of historic change. In the decades since, pundits and scholars have argued over the president's legacy: some consider Reagan a charismatic and consummate leader who renewed American strength and defeated communism. To others he was an ambitious and dangerous warmonger whose presidency was plagued with mismanagement, misconduct, and foreign policy failures. The recent declassification of Reagan administration records and the availability of new Soviet documents has created an opportunity for more nuanced, complex, and compelling analyses of this pivotal period in international affairs.

In Reagan and the World, leading scholars and national security professionals offer fresh interpretations of the fortieth president's influence on American foreign policy. This collection addresses Reagan's management of the US national security establishment as well as the influence of Secretary of Defense Caspar Weinberger and others in the administration and Congress. The contributors present in-depth explorations of US-Soviet relations and American policy toward Asia, Latin America, Europe, and the Middle East. This balanced and sophisticated examination reveals the complexity of Reagan's foreign policy, clarifies the importance of other international actors of the period, and provides new perspectives on the final decade of the Cold War.

Bradley Lynn Coleman is the director of the John A. Adams '71 Center for Military History & Strategic Analysis at the Virginia Military Institute. He is the author of Colombia and the United States: The Making of an Inter-American Alliance, 1939--1960.Kyle Longley is the Snell Family Dean's Distinguished Professor in the School of Historical, Philosophical, and Religious Studies and the School of Politics and Global Studies at Arizona State University. He is the author of six books, including Deconstructing Reagan: Conservative Mythology and America's Fortieth President.
Loading...
or
Not Currently Available for Direct Purchase