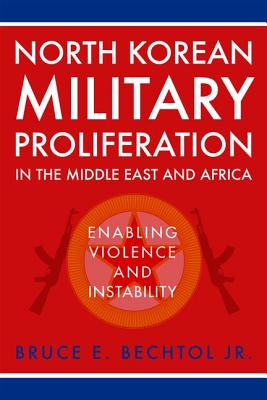 North Korean Military Proliferation in the Middle East and Africa

North Korea has posed a threat to stability in Northeast Asia for decades. Since Kim Jong-un assumed power, this threat has both increased and broadened. Since 2011, the small, isolated nation has detonated nuclear weapons multiple times, tested a wide variety of ballistic missiles, expanded naval and ground systems that threaten South Korea, and routinely employs hostile rhetoric. Another threat it poses has been less recognized: North Korea presents a potentially greater risk to American interests by exporting its weapons systems to other volatile regions worldwide.

In North Korean Military Proliferation in the Middle East and Africa, Bruce E. Bechtol Jr. analyzes relevant North Korean military capabilities, what arms the nation provides, and to whom, how it skirts its sanctions, and how North Korea's activities can best be contained. He traces illicit networks that lead to state and nonstate actors in the Middle East, including Syria, Iran, Hezbollah, and Hamas, and throughout Africa, including at least a dozen nations. The potential proliferation of nuclear and chemical weapons technology and the vehicles that carry it, including ballistic missiles and artillery, represent a broader threat than the leadership in Pyongyang. Including training and infrastructure support, North Korea's profits may range into the billions of dollars, all concealed in illicit networks and front companies so complex that the nation struggles to track and control them. Bechtol not only presents an accurate picture of the current North Korean threat -- he also outlines methodologies that Washington and the international community must embrace in order to contain it.

Bruce E. Bechtol Jr. is professor of political science at Angelo State University and a retired Marine. He is the author or editor of six previous books, including The Last Days of Kim Jong-il: The North Korean Threat in a Changing Era and Confronting Security Challenges on the Korean Peninsula.
Loading...
or
Not Currently Available for Direct Purchase