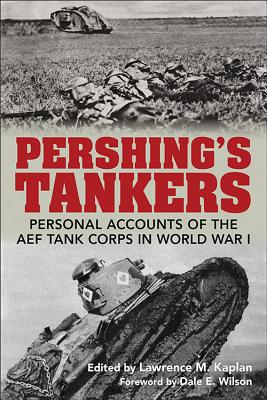 Personal Accounts of the Aef Tank Corps in World War I

After the United States declared war against Germany in April 1917, the US Army established the Tank Corps to help break the deadlock of trench warfare in France during World War I. The army envisioned having a large tank force by 1919, but when the war ended in November 1918, only three tank battalions had participated in combat operations. Shortly after, Brigadier General Samuel D. Rockenbach, Chief of the American Expeditionary Forces (AEF) Tank Corps under General John J. Pershing, issued a memorandum to many of his officers to write brief accounts of their experiences that would supplement official records. Their narratives varied in size, scope, and depth, and covered a range of topics, including the organizing, training, and equipping of the tank corps.

For the first time since these reports were submitted, Pershing's Tankers: Personal Accounts of the AEF Tank Corps in World War I presents an unprecedented look into the experiences of soldiers in the US Army Tank Corps. The book provides fresh insight into the establishment and combat operations of the tank corps, including six personal letters written by Colonel George S. Patton, Jr., who commanded a tank brigade in World War I. Congressional testimony, letters, and a variety of journal, magazine, and newspaper articles in this collection provide additional context to the officers' revealing accounts.Based on completely new sources that include official US Army personnel reports that were previously unknown to researchers, this illuminating work offers a vivid picture of life and activities in the US Army Tank Corps in France. Revealed is a rare glimpse into the thoughts and experiences of a broad cross-section of men from the senior leadership down to the platoon level, and a behind-the-scenes look into how this first generation of "tankers" helped develop new war-fighting capabilities for the US Army.

Lawrence M. Kaplan is a professional military historian who has worked for both the US Army and the Department of Defense. He is the author of Homer Lea: American Soldier of Fortune, and the editor of The Artillery Service in the War of the Rebellion, 1861--65, and The Purge of the Thirtieth Division.
Loading...
or
Not Currently Available for Direct Purchase