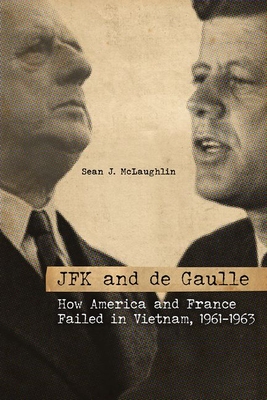 Despite French President Charles de Gaulle's persistent efforts to constructively share French experience and use his resources to help engineer an American exit from Vietnam, the Kennedy administration responded to de Gaulle's peace initiatives with bitter silence and inaction. The administration's response ignited a series of events that dealt a massive blow to American prestige across the globe, resulting in the deaths of over fifty-eight thousand American soldiers and turning hundreds of thousands of Vietnamese citizens into refugees.

This history of Franco-American relations during the Kennedy presidency explores how and why France and the US disagreed over the proper western strategy for the Vietnam War. France clearly had more direct political experience in Vietnam, but France's postwar decolonization cemented Kennedy's perception that the French were characterized by a toxic mixture of short-sightedness, stubbornness, and indifference to the collective interests of the West.

At no point did the Kennedy administration give serious consideration to de Gaulle's proposals or entertain the notion of using his services as an honest broker in order to disengage from a situation that was rapidly spiraling out of control. Kennedy's Francophobia, the roots of which appear in a selection of private writings from Kennedy's undergraduate years at Harvard, biased his decision-making. The course of action Kennedy chose in 1963, a rejection of the French peace program, all but handcuffed Lyndon Johnson into formally entering a war he knew the United States had little chance of winning.

Sean J. McLaughlin is the special collections and exhibits director at Murray State University. He is the author of the chapter "'As Long as We Live, You Shall Be Remembered': Canadian Veterans of the Vietnam War and Their Struggle for Recognition" in the forthcoming War and its Aftermath: Veteran Treatment and Reintegration in Post-War Societies. His work has appeared in publications such as The International Journal of the History of Sport, Yonsei Journal of International Studies, and Peace and Change: A Journal of Peace Research.
Loading...
or
Not Currently Available for Direct Purchase