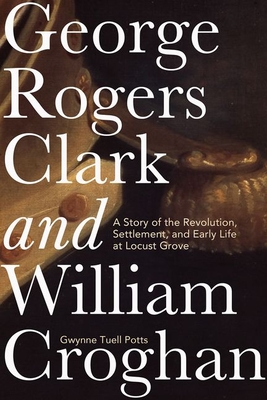 A Story of the Revolution, Settlement, and Early Life at Locust Grove

This dual biography focuses on the lives of two very different men who fought for and settled the American West and whose vision secured the old Northwest Territory for the new nation. The two represented contrasting American experiences: famed military leader George Rogers Clark was from the Virginia planter class. William Croghan was an Irish immigrant with tight family ties to the British in America. Yet their lives would intersect in ways that would make independence and western settlement possible.

The war experiences of Clark and Croghan epitomize the American course of the Revolution. Croghan fought in the Revolutionary War at Trenton and spent the winter of 1777--1778 at Valley Forge with George Washington and LaFayette before being taken prisoner at Charleston. Clark, known as the "Hannibal of the West," was famous for his victorious Illinois campaign against the British and as an Indian fighter. Following the war, Croghan became Clark's deputy surveyor of military lands for the Virginia State Line, enabling him to acquire some 54,000 acres on the edge of the American frontier. Croghan's marriage to Lucy Clark, George Rogers Clark's sister, solidified his position in society. Clark, however, was regularly called by Virginia and the federal government to secure peace in the Ohio River Valley, leading to his financial ruin and emotional decline. Croghan remained at Clark's side throughout it all, even as he prospered in the new world they had fought to create, while Clark languished. These men nevertheless worked and eventually lived together, bound by the familial connections they shared and a political ideology honed by the Revolution.

Gwynne Tuell Potts was the executive director and president of Historic Locust Grove, Inc. She is coauthor of George Rogers Clark and Locust Grove.
Loading...
or support indie stores by buying on
(This book is on backorder)