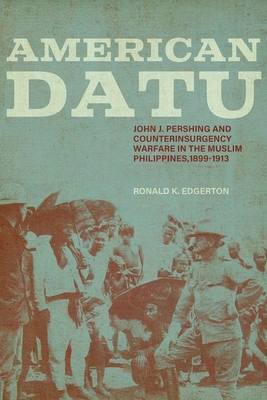 John J. Pershing and Counterinsurgency Warfare in the Muslim Philippines, 1899-1913 (Battles and Campaigns)

American Datu: John J. Pershing and Counterinsurgency Warfare in the Muslim Philippines, 1899--1913 provides a play-by-play account of a crucial but often overlooked period in the development of American counterinsurgency strategy. Tracing Pershing's military campaigns in the Philippines, Ronald K. Edgerton examines how Progressive Counterinsurgency doctrine evolved in direct response to the first sustained military encounter between the United States and Muslim militants. Pershing de-emphasized so-called civilizing efforts and stressed the practicality of building relationships with local Moro leaders and immersing himself in Moro cultural practices. In turn, Moros elected him as a fellow datu, or chief, and Pershing came to realize a fundamental principle of counterinsurgency warfare: one size does not fit all, and tactics must be molded to fit the specific environment. In light of Pershing's military success, this study calls for a reevaluation of the more invasive counterinsurgency methods used by US officers against Muslim militants today, and it addresses the important role the Philippine-American War played in developing modern US military strategy.

Ronald K. Edgerton is professor emeritus of history at the University of Northern Colorado. He previously lived in the Philippines, first as a Peace Corps volunteer and later as a Fulbright Scholar. He is the author of People of the Middle Ground: A Century of Conflict and Accommodation in Central Mindanao, 1880s--1980s.
Loading...
or
Not Currently Available for Direct Purchase