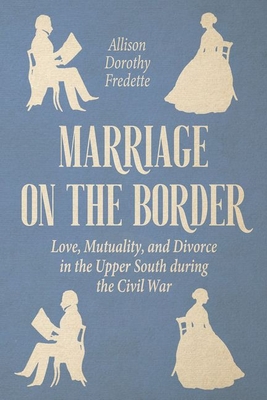 Marriage on the Border

Love, Mutuality, and Divorce in the Upper South During the Civil War (New Directions in Southern History)

Not quite the Cotton Kingdom or the free labor North, the nineteenth-century border South was a land in between. Here, the era's clashing values -- slavery and freedom, city and country, industry and agriculture -- met and melded. In factories and plantations along the Ohio River, a unique regional identity emerged: one rooted in kinship, tolerance, and compromise. Border families articulated these hybrid values in both the legislative hall and the home. While many defended patriarchal households as an essential part of slaveholding culture, communities on the border pressed for increased mutuality between husbands and wives.

Drawing on court records, personal correspondence, and prescriptive literature, Marriage on the Border: Love, Mutuality, and Divorce in the Upper South during the Civil War follows border southerners into their homes through blissful betrothal and turbulent divorce. Allison Dorothy Fredette examines how changing divorce laws in the border regions of Kentucky and West Virginia reveal surprisingly progressive marriages throughout the antebellum and postwar Upper South. Although many states feared that loosening marriage's gender hierarchy threatened slavery's racial hierarchy, border couples redefined traditionally permanent marriages as consensual contracts -- complete with rules and escape clauses. Men and women on the border built marriages on mutual affection, and when that affection faded, filed for divorce at unprecedented rates. Highlighting the tenuous relationship between racial and gendered rhetoric throughout the nineteenth century, Marriage on the Border offers a fresh perspective on the institution of marriage and its impact on the social fabric of the United States.

Allison Dorothy Fredette is assistant professor in the Department of History at Appalachian State University. Her work has appeared in West Virginia History: A Journal of Regional Studies and in Rethinking American Emancipation: Legacies of Slavery and the Quest for Black Freedom.
Loading...
or
Not Currently Available for Direct Purchase