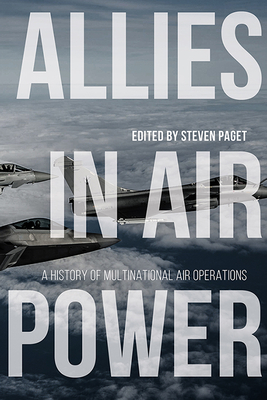 A History of Multinational Air Operations

In the past century, multinational military operations have become the norm; but while contributions from different nations provide many benefits -- from expanded capability to political credibility -- they also present a number of challenges. Issues such as command and control, communications, equipment standardization, intelligence, logistics, planning, tactics, and training all require consideration. Cultural factors present challenges as well, particularly when language barriers are involved.

In Allies in Air Power, experts from around the world survey these operations from the birth of aviation to the present day. Chapters cover conflicts including World War I, multiple theaters of World War II, the Korean War, the Vietnam War, the Gulf War, Kosovo, the Iraq War, and various United Nations peacekeeping missions. Contributors also analyze the role of organizations such as the UN, NATO, and so-called "coalitions of the willing" in laying the groundwork for multinational air operations.

While joint military action has become commonplace, there have been few detailed studies of air power cooperation over a prolonged period or across multiple conflicts. The case studies in this volume not only assess the effectiveness of multinational operations over time, but also provide vital insights into how they may be improved in the future.

Steven Paget is the University of Portsmouth's Director of Academic Support Services (International Security) at Royal Air Force College Cranwell and is a member of the editorial board of Air and Space Power Review.
Loading...
or support indie stores by buying on