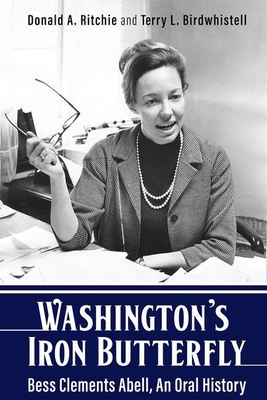 Had Elizabeth "Bess" Clements Abell (1933--2020) been a boy, she would likely have become a politician like her father, Earle C. Clements. Effectively barred from office because of her gender, she forged her own path by helping family friends Lyndon and Lady Bird Johnson. Abell's Secret Service code name, "Iron Butterfly," exemplified her graceful but firm management of social life in the Johnson White House. After Johnson's administration ended, she maintained her importance in Washington, DC, serving as chief of staff to Joan Mondale and cofounding a public relations company. Donald A. Ritchie and Terry L. Birdwhistell draw on Abell's own words and those of others known to her to tell her remarkable story. Focusing on her years working for the Johnson campaign and her time in the White House, this engaging oral history provides a window into Abell's life as well as an insider's view of the nation's capital during the tumultuous 1960s.

Donald A. Ritchie is historian emeritus of the United States Senate. He conducted oral history interviews with former senators and retired members of the Senate staff as part of the Senate oral history project and edited the transcripts of Senator Joseph R. McCarthy's investigations. Ritchie has authored a number of books including Electing FDR: The New Deal Campaign of 1932, and Press Gallery: Congress and the Washington Correspondents, which won the Richard W. Leopold Prize of the Organization of American Historians.Terry L. Birdwhistell is founding director of the Louie B. Nunn Center for Oral History and served as Dean of University of Kentucky Libraries. He is a former president of the Oral History Association and is coauthor of Our Rightful Place: Women at the University of Kentucky, 1880-1945.
Loading...
or support indie stores by buying on