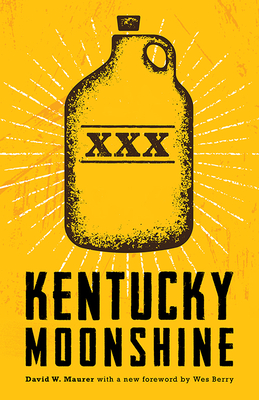 When the first American tax on distilled spirits was established in 1791, violence broke out in Pennsylvania. The resulting Whiskey Rebellion sent hundreds of families down the Ohio River by flatboat, stills on board, to settle anew in the fertile bottomlands of Kentucky. Here they used cold limestone spring water to make bourbon and found that corn produced even better yields of whiskey than rye. Thus, the licit and illicit branches of the distilling industry grew up side-by-side in the state. This is the story of the illicit side -- the moonshiners' craft and craftsmanship, as practiced in Kentucky. A glossary of moonshiner jargon sheds light on such colorful terms as "puker," "slop," and "weed-monkey."

With a new foreword by author Wes Berry, David M. Maurer's classic history of this subject is tongue-in-cheek, but nevertheless provides a realistic look at the Kentucky moonshiner and the moonshining industry.

David W. Maurer (1906-1981) was professor of linguistics at the University of Louisville. He was the author of The Big Con: The Story of the Confidence Man, Narcotics and Narcotic Addiction, and Whiz Mob: A Correlation of the Technical Argot of Pickpockets with Their Behavior Pattern.
Loading...
or support indie stores by buying on