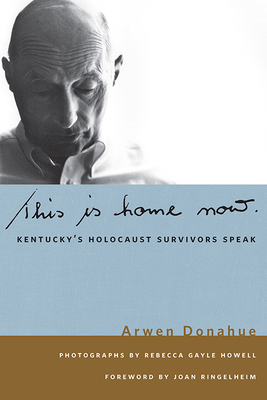 This Is Home Now

At the end of World War II, many thousands of Jewish Holocaust survivors immigrated to the United States from Europe in search of a new beginning. Most settled in major metropolitan areas, usually in predominantly Jewish communities, where proximity to coreligionists offered a measure of cultural and social support. However, some survivors settled in smaller cities and rural areas throughout the country, including in Kentucky, where they encountered an entirely different set of circumstances. Although much scholarship has been devoted to Holocaust survivors living in major cities, little has been written about them in the context of their experiences elsewhere in America.

This Is Home Now: Kentucky's Holocaust Survivors Speak presents the accounts of Jewish survivors who resettled outside of the usual major metropolitan areas. Using excerpts from oral history interviews and documentary portrait photography, author Arwen Donahue and photographer Rebecca Gayle Howell tell the fascinating stories of nine of these survivors in a unique work of history and contemporary art. The book focuses on the survivors' lives after their liberation from Nazi concentration camps, illuminating their reasons for settling in Kentucky, their initial reactions to American culture, and their reflections on integrating into rural American life.

Arwen Donahue has served as program coordinator in the department of oral history at the United States Holocaust Museum and managed its Post-Holocaust Interview Project. She is the author of Landings: A Crooked Creek Farm Year.
Loading...
or support indie stores by buying on
(This book is on backorder)