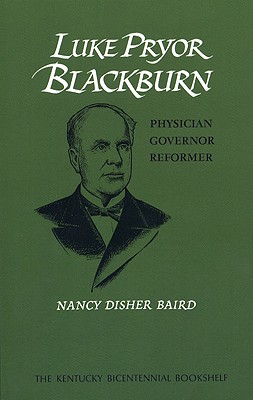 Deadly epidemics of yellow fever and Asiatic cholera plagued the South throughout the nineteenth century, yet doctors had few effective weapons against the diseases. Luke Pryor Blackburn, a Kentucky-born physician, worked with more success than most to save the lives of those who were stricken and to prevent the spread of infection. He aided towns throughout Kentucky and the Deep South where resident doctors had fled or had fallen ill themselves.

Blackburn's reputation as a humanitarian soared following his aid to Western Kentucky during the yellow fever epidemic of 1878. A year later he was easily elected governor of Kentucky in spite of his political inexperience and the revelation that he had practiced germ warfare during the Civil War. While in office, he sought prison reform and the relief of the unbelievable overcrowding at the state penitentiary, pardoning hundreds of inmates and drawing bitter criticism from across the Commonwealth. Yet his continued efforts to improve prison conditions set Kentucky on the slow road to penal reform.

His contemporaries labeled Blackburn a philanthropist, a mass-murderer, a good Samaritan, and an "old loon." Nancy Disher Baird portrays him as a man who stood by his convictions, whether they required strict enforcement of innovative public health measures or unpopular expenditures on behalf of convicts.

Nancy Disher Baird is reference librarian at the Kentucky Library of Western Kentucky University. She is also the author of David Wendel Yandell: Physician of Old Louisville.
Loading...
or support indie stores by buying on