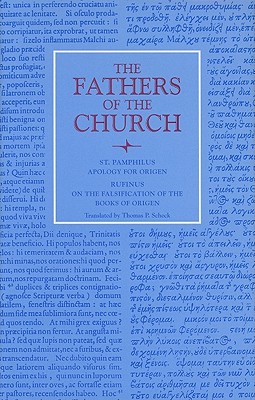 Presented here for the first time in English translation (from Rufinus's Latin version) is the Apology for Origen, the sole surviving work of St. Pamphilus of Caesarea (d. 310 AD), who was one of the most celebrated priest-martyrs of the ancient Church. Written from prison with the collaboration of Eusebius (later to become the bishop of Caesarea), the Apology attempts to refute accusations made against Origen, defending his views with passages quoted from his own works. Pamphilus aims to show Origen's fidelity to the apostolic proclamation, citing excerpts that demonstrate Origen's orthodoxy and his vehement repudiation of heresy. He then takes up a series of specific accusations raised against Origen's doctrine, quoting passages from Origen's writings that confute charges raised against his Christology. Some excerpts demonstrate that Origen did not deny the history of the biblical narratives; others clarify Origen's doctrine of souls and aspects of his eschatology. Pamphilus was beheaded on February 16, 310, under the emperor Maximinus Daia.

In 397 AD, at the urgent invitation of his friend Macarius, Rufinus of Aquileia translated Pamphilus's Apology into Latin, the first of his extensive translations of Origen's writings. Rufinus probably did not suspect the incomparable importance of his undertaking, but by translating Origen he saved from impending ruin some of the most precious monuments of Christian antiquity, destined to form Latin minds for many years to come.

Also presented in this volume is a new English translation of Rufinus's work, On the Falsification of the Books of Origen in which Rufinus sets forth arguments for his theory that Origen's writings had suffered interpolations by heretics. Rufinus demonstrates that literary frauds and forgeries carried out by heretics were widespread and affected many writers. He may have been misled by his intense respect for Origen's genius, and he certainly exaggerated when he claimed that all the doctrinal errors to be met with in Origen's works were due to interpolations.

Thomas P. Scheck is assistant professor of classics and theology at Ave Maria University. He is the translator of several works of the Church Fathers: Origen's Commentary on the Epistle to the Romans, Homilies on Numbers, and Homilies on Ezekiel, St. Jerome's Commentary on Matthew, and Commentaries on Galatians, Titus, and Philemon. His research interests include the reception of the Church Fathers in the West and the theology of Erasmus of Rotterdam.