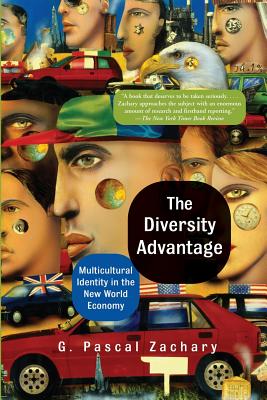 Why is Japan, a country that looked economically invincible a decade ago, stagnating, while long-moribund Ireland booms? What are the qualities that will ensure the continued dominance of U.S. culture, society, and business? In The Diversity Advantage, G. Pascal Zachary provides a provocative roadmap to the new civilization arising out of sweeping shifts in the world economy. He reveals -- through vivid examples of individuals and institutions -- that the key new determinants for any nation's economic, political, and cultural success are, surprisingly, a diverse population and a "mongrel" sense of self. Roaming the globe, Zachary shows how the rise of new forms of identity and migration are helping to determine exactly who will win and lose in the next century. Zachary's thesis isn't't just about countries but about individuals, too. In his tour of a new global civilization, we meet a fascinating gallery of successful characters who possess an intriguing mix of "roots" and "wings." Strong enough to know who they are, they are nevertheless ceaselessly becoming someone else -- and in the process bestowing the gifts of creativity and social harmony on the cities and states that they call home. Updated with a new introduction by the author.

G. Pascal Zachary is a former senior writer and foreign correspondent for the Wall Street Journal. His writings also have appeared in Fast Company, Mother Jones, Technology Review, Foreign Policy, and other publications. He is a contributing editor to the radical news magazine In These Times, for whom he writes about Africa, political economy, and jazz. He is the author of two previous books: Showstopper and Endless Frontier. Zachary lives in Berkeley, California and Accra, Ghana.
Loading...
or support indie stores by buying on