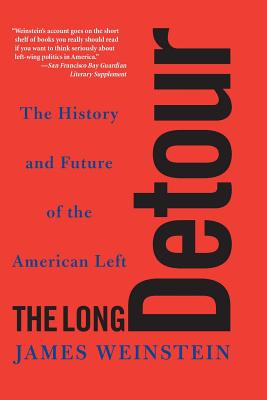 The History and Future of the American Left

The Long Detour is an intellectually engaging overview of the history of socialism in the United States and of the continuing relevance of socialist principles today. Historian and journalist James Weinstein, a lifelong socialist and one-time Communist, takes readers from the movement's early years of utopian communities, through the heyday of engagement with the makers of corporate America, and into the future of a de-industrializing era. He contends that socialism as a political movement was sidetracked when Communist domination of the American left stifled creative social thought and diverted the traditional left into sterile disputes over the true nature of the Soviet Union. And he argues that while "real existing socialism" - which is what the Soviets called their system - is dead, the humane social principles articulated by Marx and the leaders of the pre-1917 socialist movement remain vitally important to those on the left who seek to realize the promise of American democracy.

James Weinstein is the founding editor and publisher of In These Times magazine, and was the founder of the Socialist Review. He is the author of several books, including The Decline of Socialism in America and The Corporate Ideal in the Liberal State. He lives in Chicago.
or
Not Currently Available for Direct Purchase
Copyright © 2020 American Booksellers Association