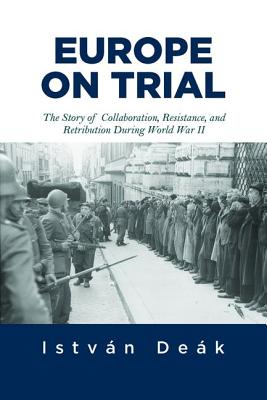 The Story of Collaboration, Resistance, and Retribution During World War II

Europe on Trial explores the history of collaboration, retribution, and resistance during World War II. These three themes are examined through the experiences of people and countries under German occupation, as well as Soviet, Italian, and other military rule. Those under foreign rule faced innumerable moral and ethical dilemmas, including the question of whether to cooperate with their occupiers, try to survive the war without any political involvement, or risk their lives by becoming resisters. Many chose all three, depending on wartime conditions. Following the brutal war, the author discusses the purges of real or alleged war criminals and collaborators, through various acts of violence, deportations, and judicial proceedings at the Nuremberg International Military Tribunal as well as in thousands of local courts. Europe on Trial helps us to understand the many moral consequences both during and immediately following World War II.

Istvan Deak, a professor emeritus of history at Columbia University, is an authority on modern Central European and general World War II history. Writing often for the New York Review of Books and the New Republic, Deak has crafted review essays that cover the breadth and depth of the history of Hitler's Europe. Norman M. Naimark is the Robert and Florence McDonnell Professor of East European Studies at Stanford University and Sakurako and William Fisher Director of the Stanford Global Studies Division. He is also Senior Fellow at the Hoover Institution and the Freeman-Spogli Institute of International Studies.
Loading...
or support indie stores by buying on