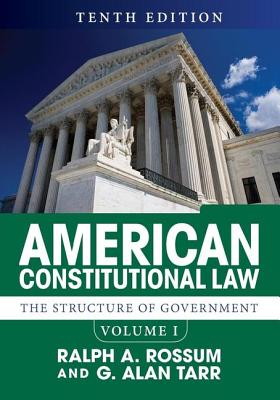 The Structure of Government

Ralph A. Rossum is Salvatori Professor of American Constitutionalism at Claremont McKenna College. He has written or co-written eight books, including his most recent, Understanding Clarence Thomas: The Jurisprudence of Constitutional Restoration (Univ. of Kansas Press, 2013). He has served in the U.S. Department of Justice as Deputy Director of its Bureau of Justice Statistics and as a board member of its National Institute of Corrections. G. Alan Tarr is Distinguished Professor of Political Science and director of the Center for State Constitutional Studies, Rutgers University, Camden. He is author of twelve books, including Without Fear or Favor: Judicial Independence and Judicial Accountability in the American States (Stanford University Press) and Judicial Process and Judicial Policymaking, Sixth Edition (Cengage). He has served as a constitutional consultant in Brazil, Burma, Cyprus, Russia, and South Africa. Three times an NEH Fellow, he is currently editor of a fifty-volume reference series on state constitutions.
or
Not Currently Available for Direct Purchase