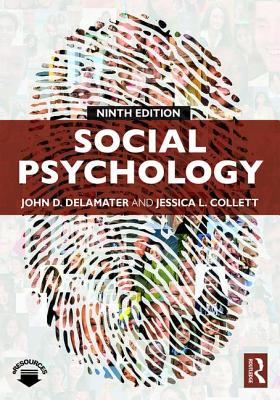 This fully revised and updated edition of Social Psychology is an engaging exploration of the question, "what makes us who we are?" presented in a new, streamlined fashion. Grounded in the latest research, Social Psychology explains the methods by which social psychologists investigate human behavior in a social context and the theoretical perspectives that ground the discipline.

Each chapter is designed to be a self-contained unit for ease of use in any classroom. This edition features new boxes providing research updates and "test yourself " opportunities, a focus on critical thinking skills, and an increased emphasis on diverse populations and their experiences.

John D. DeLamater was Conway-Bascom Professor of Sociology-Emeritus at the University of Wisconsin-Madison until his death in 2017. John received his education at the University of California, Santa Barbara, and the University of Michigan. He earned his Ph.D. in Social Psychology in 1969. He began teaching an undergraduate course in social psychology in 1970, and graduate courses and seminars in the area beginning in 1981. He led a seminar on teaching for graduate students, and won several teaching awards, including the Chancellor's Award for Distinguished Teaching, during his career. He was also the co-editor of the Handbook of Social Psychology, 2nd edition, published by Springer. He had been a co-author of this text since its first edition. Jessica L. Collett is Professor of Sociology at the University of California, Los Angeles. This very book, in a much earlier edition, inspired her own interest in social psychology during her time as an undergraduate at Winthrop University. After Winthrop, she went on to study social psychology at the University of Arizona, where she received her Ph.D. in Sociology in 2006. She is an award-winning instructor, most recently receiving the Charles E. Sheedy Award for Excellence in Teaching from the College of Arts and Letters at the University of Notre Dame. She regularly teaches social psychology at both the undergraduate and graduate levels, as well as courses on social inequality and socialization and the life course.
or
Not Currently Available for Direct Purchase
Copyright © 2020 American Booksellers Association