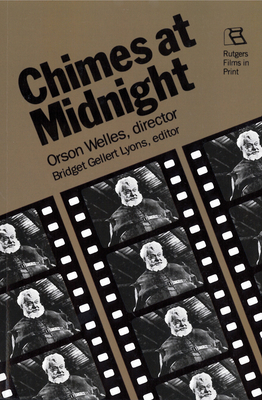 Among the films inspired by Orson Welles's lifelong involvement with Shakespeare, the greatest is Chimes at Midnight (1966). It is a masterly conflation of the Shakespearean history plays that feature Falstaff, the great comic figure played by Welles himself in the film. For Welles, the character was also potentially tragic: the doomed friendship between Falstaff and Prince Hal becomes an image of the end of an age. To this epic subject Welles brings the innovative film techniques that made him famous in Citizen Kane, The Lady from Shanghai,"and Touch of Evil.

This volume offers a complete continuity script of Chimes at Midnight, including its famous battle sequence. Each shot is described in detail and is keyed to the original Shakesperian sources, thus making the volume an invaluable guide to Welles as an adaptor and creator of texts. The first complete transcription of the continuity script of Chimes is accompanied by the editor's critical introduction on Welles's transformation of Shakespeare; a special interview with Keith Baxter, one of the film's principal actors, which discusses its production history; reviews and articles; and a biographical sketch of Welles, a filmography, and a bibliography.