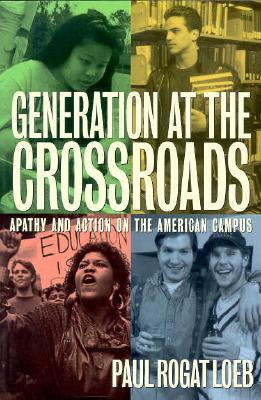 Generation at the Crossroads

Apathy and Action on the American Campus

Challenging prevailing media stereotypes, Generation at the Crossroads explores the beliefs and choices of the students who came of age in the 1980s and 1990s. For seven years, at over a hundred campuses in thirty states, Paul Loeb asked students about the values they held. He examines their concepts of responsibility, the links they draw between present and future, and how they view themselves in relation to the larger human community in which they live. He brings us a range of voices, from "I'm not that kind of person," to "I had to take a stand." Loeb looks at how the rest of us can serve young people as better role models, and give them courage and vision to help build a better world.

This insightful book explores the culture of withdrawal that dominated American campuses through most of the eighties. He locates its roots in historical ignorance, relentless individualism, mistrust of social movements, and a general isolation from urgent realities. He examines why a steadily increasing minority has begun to take on critical public issues, whether environmental activism, apartheid, hunger and homelessness, affordable education, or racial and sexual equity. Loeb looks at individuals who have overcome precisely the barriers he has described, and how their journeys can become models. The generational choices he explores will shape our common future.

Paul Rogat Loeb is the author of Nuclear Culture and Hope in Hard Times. His articles have appeared in the Washington Post, the Los Angeles Times, Psychology Today, Mother Jones, Utne Reader, New Age, The Village Voice, the St. Louis Post Dispatch, and the International Herald Tribune. He has lectured at over 150 colleges and universities including Harvard, Stanford, Dartmouth, Chicago, MIT, Yale, Cornell, and Columbia, and been interviewed on numerous national TV and radio programs, including NPR, ABC talk radio, and the NBC, CNN, and C-Span TV networks. He lives in Seattle, Washington.
Loading...
or
Not Currently Available for Direct Purchase