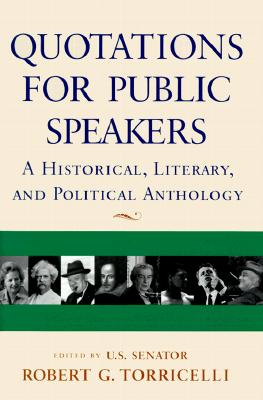 Whether you are making a business presentation to a new client, speaking at a Little League banquet, or proposing a wedding toast, finding the right words with which to express yourself can be difficult. Even Mark Twain said, “It usually takes me more than three weeks to prepare a good impromptu speech.”

U.S. Senator Robert G. Torricelli has compiled a superlative anthology of more than two thousand quotations from nearly one thousand authors, selected to enhance your public speaking. Arranged under 50 categories and indexed by author, Quotations for Public Speakers is an easy-to-use reference guide you’ll find yourself turning to time and again for creative and inspirational ways to express yourself and engage your audience.

Speakers vary from Albert Einstein (“Only two things are infinite, the universe and human stupidity, and I’m not sure about the former.”) to Wilt Chamberlain (“Nobody roots for Goliath.”); from Anaïs Nin (“Life shrinks or expands in proportion to one’s courage.”) to Lena Horne (“You have to be taught second class; you’re not born that way.”); from Aristotle (“Liars, when they speak the truth are not believed.”)  to Aldous Huxley (“Consistency is contrary to nature, contrary to life. The only completely consistent people are dead.”); from Barbra Streisand (“Art does not exist only to entertain, but also to challenge one to think, to provoke, even to disturb, in a constant search for truth.”) to Woody Allen (“It’s very hard to get your heart and head together in life. In my case, they’re not even friendly.”).

The scope of topics ranges from youth (“Children’s talent to endure stems from their ignorance of alternatives,” — Maya Angelou) to old age (“I’m at an age where my back goes out more than I do,”— Phyllis Diller); from justice (“Justice is truth in action,” — Benjamin Disraeli) to racism (“For racism to die, a totally different America must be born,” — Stokely Carmichael); from religion (“God’s in his Heaven — all’s right with the world!” — Robert Browning) to science (“We live in a society exquisitely dependent on science and technology, in which hardly anyone knows anything about science and technology,” — Carl Sagan); from war (“War is evil, but often the lesser evil,” —  George Orwell) to love (“There is only one happiness in life, to love and be loved.” — George Sand)

Practical, enjoyable, and stimulating, this is a collection for every public speaker trying to inform and entertain.

Robert Guy Torricelli (born August 27, 1951), nicknamed "the Torch", is an American politician who served as the United States senator from New Jersey from 1997 to 2003 and a member of the U.S. House of Representatives from New Jersey's 9th district from 1983 to 1997. From 1999 to 2000, he served as the chairman of the Democratic Senatorial Campaign Committee.

Torricelli helped rewrite federal bankruptcy rules, assuring federal financing for hospitals. A leading voice for tax cuts, he was the author of the provisions reducing taxes for middle income families and making college tuition tax deductible. He obtained over $1 billion in federal funding for the construction of affordable housing in New Jersey. Additionally, Torricelli established the federal urban park restoration program and secured funding for law enforcement and education, leading to the addition of thousands more police officers and reductions in class sizes. He served a single term in the Senate, dropping his run for re-election in October 2002 after a campaign finance scandal involving contributions by David Chang, an imprisoned Korean businessman. He subsequently founded Rosemont Associates, a consulting group