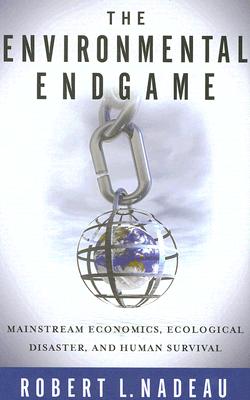 For decades, scholars have warned of an impending global environmental crisis. Yet politicians, particularly in the United States, have consistently shown that they are not taking the threat seriously. Initiatives aimed at protecting the planet are commonly seen as belonging to a category unto themselves-the preserve of scientists and environmental enthusiasts.

In this groundbreaking book, Robert L. Nadeau warns that we have moved menacingly close to a global environmental catastrophe and that to evade this fate we must stop drawing a distinction between issues that are "environmental" or "scientific" and those that reside in the sphere of "real life." Although scientists have attempted to bring ecological concerns to the forefront of global issues, problems are rarely communicated in ways that can be readily understood by those outside the scientific community.

Bringing together perspectives from a variety of disciplines, including economics, politics, biology, and the history of science, The Environmental Endgame articulates the concerns of scientists in a way that they become the real-life, tangible concerns of people around the world. Nadeau asserts that we have entered a new phase of human history that cannot be one of separation and division but must be one of cooperation and mutual goals.

Nadeau demonstrates that our current governmental and financial institutions, based on neoclassical economics, lack the mechanisms for implementing viable solutions to large-scale crises. Such steps cannot be taken without moving beyond the power politics of the nation-state system. The book concludes with a call to view the natural world as part of humanity, not separate from it. This unifying worldview would be a catalyst for implementing the international government organizations necessary to resolving the crisis.

The Environmental Endgame is an ambitious and timely book that will change the way we think about our economy, our government, and the environment. It should be read by everyone who cares about the pervasive neglect and abuse of planet Earth and wants to know what can be done about it.

The Environmental Endgame is substantive, innovative, and profound. Nadeau exposes the weaknesses of neoclassical economic theory, and shows why it cannot address environmental concerns. He offers instead a stimulating and radically new approach to sustainability.
— Joseph Tainter

The Environmental Endgame by Robert Nadeau is an astonishingly original and challenging book that examines the current global environmental crisis from multiple angles and differing perspectives. Above all, it provides the reader a sobering overview about critical steps that must be taken to undo momentous mistakes that policy makers have made in the past century by clinging to anachronistic and outmoded economic theories that belong to the early days of Western industrial societies.
— A. Karim Ahmed

Robert L. Nadeau is a professor of environmental science and public policy at George Mason University in Fairfax, Virginia. He is the author of eight books, including Minds, Machines, and Human Consciousness; S/he Brain: Science and Sexual Politics ; The Non-Local Universe: The New Physics and Matters of the Mind; and The Wealth of Nature: How Mainstream Economics Failed the Environment.
Loading...
or
Not Currently Available for Direct Purchase