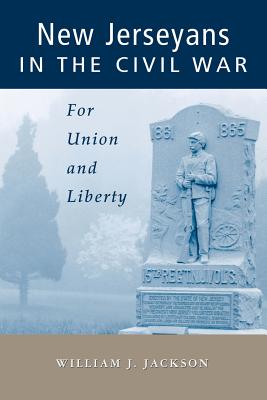 New Jerseyans in the Civil War

For Union and Liberty

The Civil War divided New Jersey just as it did the nation. As a small state sandwiched between two large and powerful neighbors, New Jersey had always enthusiastically supported the creation of a strong central government. On the other hand, many New Jersey citizens did not share the anti-slavery sentiments of the North; they supported property rights of slave owners and believed in the natural inferiority of blacks. Subsequently, when southern states began to secede from the Union to form the Confederacy, New Jerseyans were left divided and confused.

William J. Jackson examines the ironies, paradoxes, and contradictions that characterized New Jersey's unique historical role in the war. This is the only book to incorporate social and political history with that of military history and strategy. Civil War aficionados and historians will also welcome Jackson's analysis of the participation of New Jersey African Americans on the home front and in the military.


Praise For New Jerseyans in the Civil War: For Union and Liberty…

Praise for New Jerseyans in the Civil WarJackson has written a broad overview of New JerseyÆs participation in the Civil War based primarily on secondary and published primary sources. The chronological narrative gives greatest attention to military matters. . . . Whether looking at the armies in the field or the folks at home, one theme recurs: New JerseyÆs painful struggle with the issues of race and slavery. It is the thoughtful treatment of this larger [slavery] issue that makes this an especially appropriate choice for public and academic libraries serving New Jersey.
— Choice

William J. Jackson has written a holistic account of New JerseyÆs role in the Civil War, throwing light on the stateÆs social divisions before and during the conflict, its political life in the 1860s, its material and military contribution to the Union war effort, and the role of its African American populace at home and in battle. . . . New Jerseyans may have been divided about the great issues of the Civil War, but historians should decidedly appreciate this useful study.
— Journal of American History

William J. Jackson argues that New Jerseyans responded to the outbreak of the Civil War with a desire to preserve the union, protect republican government, subdue traitors, and defend their industrial interests. Most New Jerseyans did not wish to turn the conflict into an abolitionist crusade fearing that free blacks would overrun the state. . . . Only a small percent of the stateÆs population embraced the higher moral purpose of abolishing slavery. . . . Civil War enthusiasts and readers interested in the history of New Jersey will find this book interesting and informative. Jackson utilizes a good blend of primary and secondary sources to justify his assertions. . . . A well-structured account worth reading.
— Archival Arranger

A work whose appeal is likely to extend well beyond the world of Civil War buffs. . . . New Jerseyans in the Civil War deals not just with issues but with individuals. Jackson quotes extensively from the diaries and letters of several New Jersey soldiers, both officers and men, and as the reader comes to know these people, the war becomes immediate. . . . [Jackson] follows the fate of various New Jersey units that, as casualties and desertions mounted and fewer men enlisted, became so small they were absorbed into other units. The same attrition eventually made racially integrated units more common, which did wonders for improving public attitudes toward the martial abilities of black soldiers.
— Trenton Times

William Jackson has given us a lucid, valuable account that integrates New Jersey politics and war production on the home front with the important contribution by Jersey soldiers and officers on the war's principal battlefields.
— James McPherson

WILLIAM J. JACKSON taught history at The Lawrenceville School in New Jersey from 1966 to 1994. Since his retirement, he has led courses on the Civil War in Elderhostel and the ILEAD program at Dartmouth College.
Loading...
or support indie stores by buying on