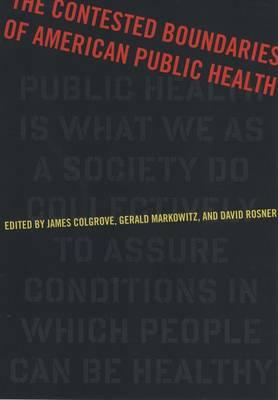 The role of public health services in America is generally considered to be the reduction of illness, suffering, and death. But what exactly does this mean in practice? At different points in history, professionals in the field have addressed housing reform, education about sex and illegal drugs, hospital and clinic care, gun violence, and even bioterrorism. But there is no agreement about how far public health efforts should go in attempting to modify behaviors seen as lifestyle choices, or whether the field's mandate extends to intervening in broader social and economic conditions.

The authors of the thirteen essays in this book attempt to understand what are, and what should be, the field's chief goals and activities. Drawing on examples that include September 11th, Hurricane Katrina, the anthrax scare, and more, contributors examine the historical evolution of the profession and show how public health is changing in the context of natural and human-made disasters and the politics that surround them.

James Colgrove is an assistant professor of sociomedical sciences at Columbia University.

David Rosner is the Ronald Lauterstein professor of sociomedical sciences and history at Columbia University and the codirector of the Center for the History and Ethics of Public Health.
Loading...
or
Not Currently Available for Direct Purchase