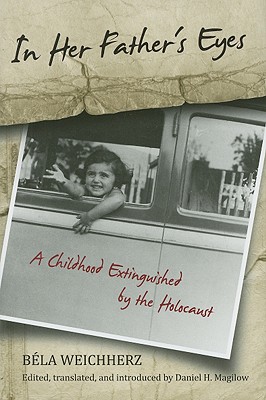 In Her Father's Eyes

A Childhood Extinguished by the Holocaust

Translated from the German for the first time, In Her Father's Eyes is the diary of Béla Weichherz, in which he documents the life of his only daughter, Kitty, in prewar Czechoslovakia. Started as a baby book before her birth in 1929, the journal contains frequent entries about the ups and downs of Kitty's childhood, often written in vivid detail. Weichherz included photographs, developmental charts, and Kitty's own drawings to enhance the text. The journal entries stop in early spring 1942, just days before the family's deportation to a Nazi death camp. In its final pages, a recognizable tale of one anonymous life becomes a heartbreaking story about how anti-Semitism and nationalism in Slovakia shattered this normalcy.

In Her Father's Eyes is a moving tale about Jewish life and a father's profound love for his only child. By bridging prewar and wartime periods, the diary also provides a rich context for understanding the history from which the Holocaust emerged.

Daniel H. Magilow is an assistant professor of German at the University of Tennessee. From 2005 to 2006, he was a postdoctoral fellow at the United States Holocaust Memorial Museum in Washington, DC.
Loading...
or
Not Currently Available for Direct Purchase