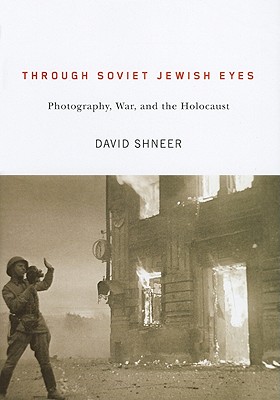 Photography, War, and the Holocaust

Most view the relationship of Jews to the Soviet Union through the lens of repression and silence. Focusing on an elite group of two dozen Soviet-Jewish photographers, including Arkady Shaykhet, Alexander Grinberg, Mark Markov-Grinberg, Evgenii Khaldei, Dmitrii Baltermants, and Max Alpert, Through Soviet Jewish Eyes presents a different picture. These artists participated in a social project they believed in and with which they were emotionally and intellectually invested-they were charged by the Stalinist state to tell the visual story of the unprecedented horror we now call the Holocaust.

These wartime photographers were the first liberators to bear witness with cameras to Nazi atrocities, three years before Americans arrived at Buchenwald and Dachau. In this passionate work, David Shneer tells their stories and highlights their work through their very own images-he has amassed never-before-published photographs from families, collectors, and private archives.

Through Soviet Jewish Eyes helps us understand why so many Jews flocked to Soviet photography; what their lives and work looked like during the rise of Stalinism, during and then after the war; and why Jews were the ones charged with documenting the Soviet experiment and then its near destruction at the hands of the Nazis.

DAVID SHNEER is associate professor of history and director of Jewish studies at the University of Colorado at Boulder. His books include Yiddish and the Creation of Soviet Jewish Culture, a finalist for the National Jewish Book Award.
Loading...
or
Not Currently Available for Direct Purchase