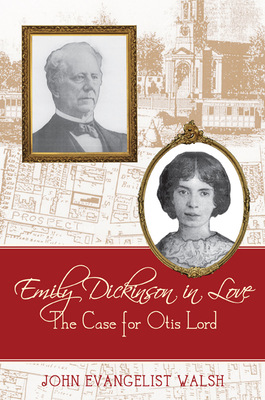 The Case for Otis Lord

From the award-winning author of Poe the Detective: The Curious Circumstances Behind "The Mystery of Marie Roget" comes a compelling argument for the identity of Emily Dickinson’s true love

Proud of my broken heart

Since thou didst break it,

Proud of the pain I

Those words were written by Emily Dickinson to a married man. Who was he?

For a century or more the identity of Emily Dickinson’s mysterious “Master” has been eagerly sought, especially since three letters from her to him were found and published in 1955. In Emily Dickinson in Love, John Evangelist Walsh provides the first book-length treatment of this fascinating subject, offering a solution based wholly on documented facts and the poet’s own writings.

Crafting the affair as a love story of rare appeal, and writing with exquisite attention to detail, in Part I Walsh reveals and meticulously proves the Master to be Otis Lord, a friend of the poet’s father and a man of some reputation in law and politics. Part II portrays the full dimensions of their thirty-year romance, most of it clandestine, including a series of secret meetings in Boston.

After uncovering and confirming the Master’s identity, Walsh fits that information into known events of Emily’s life to make sense of facts long known but little understood—Emily’s decision to dress always in white, for instance, or her extreme withdrawal from a normal existence when she had previously been an active, outgoing friend to many men and women.

In a lengthy section of Notes and Sources, Walsh presents his proofs in abundant detail, demonstrating that the evidence favors one man so irresistibly that there is left no room for doubt. Each reader will decide if he has truly succeeded in making the case for Otis Lord.


Praise For Emily Dickinson in Love: The Case for Otis Lord…

"Emily Dickinson is popularly portrayed as a recluse who shunned romance and love. As Dickinson biographer Walsh points out in this compelling tale of love and mystery, Dickinson’s only documented affair of the heart—with the elderly Otis Lord—didn’t happen until she was in her 50s, about eight years before her death. Their involvement, which began in 1877, after Lord’s wife’s death, continued for seven years until Lord’s death in 1884. The two shared a fully committed love, though they met infrequently, otherwise expressing their feelings in letters. But scholars have been faced with a mystery regarding Dickinson’s earlier love life: letters published 50 years ago reveal a romantic attachment in her 30s with an unidentified man she called 'Master.' With painstaking detective work, Walsh examines each of these letters, comparing them with Dickinson’s confessional poetry and other letters, and claims that 'Master' was Lord, who ruled Dickinson’s heart much earlier than previously known. It was at the end of the affair that Dickinson became the familiar recluse dressed in white. In appendixes, Walsh presents the text and reproductions of the 'Master letters.'"
— Publishers Weekly

"The mention of Emily Dickinson's name does not generally conjure up images of a hot-blodded hussy sneaking off for steamy encounters with a married man who was old enough to be her father. But that's essentially the picture the author presents in this intriguing piece of literary detective work. The love story Walsh tells is compelling."
— Foreword Reviews

"You don’t have to be a Dickinson scholar to appreciate the details of research and informed speculation revealed in Emily Dickinson in Love. A cache of letters, which appeared in the possession of a literary confidence man in the decade after Dickinson’s death, were found to be a series of intense, emotional declarations by the poet to someone she called 'Master,' with whom she had clearly been infatuated for years. At the time, the Dickinson family was convinced of their authenticity, and, indeed, there is every reason to believe that they were written by Emily Dickinson—but to whom? The author here makes a compelling argument for Otis Lord, two decades older than Emily, a distinguished judge of the Massachusetts Supreme Judicial Court, and married. There is no evidence that the meeting of these two disparate minds ever led to anything more than a fierce emotional bond, featuring chaste meetings in Boston and
at the Dickinson household. But Walsh makes a persuasive case that Judge Lord was, in fact, the Master, and finds suggestions to support his notion throughout Dickinson’s poetry."

JOHN EVANGELIST WALSH is the author of numerous books of biography and history, including biographies of Emily Dickinson, John Keats, and Robert Frost as well as two well-received works on Abraham Lincoln. He has three times been a finalist for an Edgar Award from the Mystery Writers of America, winning once for Poe the Detective: The Curious Circumstances Behind "The Mystery of Marie Roget." His book The Shadows Rise: AbrahamLincoln and the Ann Rutledge Legend was a finalist for the prestigious Gettysburg Prize.