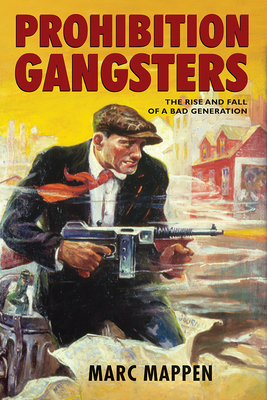 The Rise and Fall of a Bad Generation

Master story teller Marc Mappen applies a generational perspective to the gangsters of the Prohibition era—men born in the quarter century span from 1880 to 1905—who came to power with the Eighteenth Amendment.

On January 16, 1920, the Eighteenth Amendment to the Constitution went into effect in the United States, “outlawing the manufacture, sale, or transportation of intoxicating liquors.” A group of young criminals from immigrant backgrounds in cities around the nation stepped forward to disobey the law of the land in order to provide alcohol to thirsty Americans.

Today the names of these young men—Al Capone, Lucky Luciano, Dutch Schultz, Legs Diamond, Nucky Johnson—are more familiar than ever, thanks in part to such cable programs as Boardwalk Empire. Here, Mappen strips way the many myths and legends from television and movies to describe the lives these gangsters lived and the battles they fought. Placing their criminal activities within the context of the issues facing the nation, from the Great Depression, government crackdowns, and politics to sexual morality, immigration, and ethnicity, he also recounts what befell this villainous group as the decades unwound.

Making use of FBI and other government files, trial transcripts, and the latest scholarship, the book provides a lively narrative of shootouts, car chases, courtroom clashes, wire tapping, and rub-outs in the roaring 1920s, the Depression of the 1930s, and beyond. Mappen asserts that Prohibition changed organized crime in America. Although their activities were mercenary and violent, and they often sought to kill one another, the Prohibition generation built partnerships, assigned territories, and negotiated treaties, however short lived. They were able to transform the loosely associated gangs of the pre-Prohibition era into sophisticated, complex syndicates. In doing so, they inspired an enduring icon—the gangster—in American popular culture and demonstrated the nation’s ideals of innovation and initiative.

MARC MAPPEN, PhD, teaches at Rutgers University. He is the coeditor of the award-winning Encyclopedia of New Jersey and author of Jerseyana: The Underside of New Jersey History (both Rutgers University Press). He has written articles for the New York Times, the Los Angeles Times, Rutgers Magazine, and other publications and has appeared on the History Channel and National Public Radio.


Praise For Prohibition Gangsters: The Rise and Fall of a Bad Generation…

"Marc Mappen proves an adept storyteller as he takes readers beyond 'Boardwalk Empire.' Mappen spins some good yarns about the gangsters, dominated by New Yorkers, whose rise was triggered by the 18th Amendment, which took effect in 1920, and who proved that, at times, crime not only pays, but pays very well."
— Sam Roberts

"Prohibition created an enormous economic opportunity for a generation of young criminals. As chronicled by Marc Mappen, the true, violent, and extravagant lives of these men make dramatizations like Boardwalk Empire look tame by comparison. A must -read for anyone interested in the origins of organized crime in America."
— Nicholas Gage

"Kudos to Marc Mappen for producing so riveting a study about a generation of gangland mobsters who used National Prohibition to grab lots of money and petty power for themselves. A big winner of a book about a bunch of lousy looting losers. . . . Fascinating reading.  Highly recommended!"
— James Kirby Martin

"A book about the Prohibition gangsters should be a fascinating and exciting read. Mappen does not disappoint. His fast-moving but
authoritative narrative takes readers through the Prohibition years and beyond as he traces the careers of such underworld luminaries as John Torrio, Al Capone, Lucky Luciano, Meyer Lansky, Legs Diamond, and Dutch Schultz. Mappen’s book is a splendid introduction to the story of a generation of criminals who captured the American imagination."
— Journal of American Culture

"Marc Mappen far outstrips his fellow crime writers [when] describing mob activity in smaller U.S. cities. Chicago and New York have been examined enough, so Mappen turns his eye on the Purple Gang of Detroit, the Pendergast machine in Kansas City, and the bootleg wars of Cleveland."
— Philadelphia Review of Books
or support indie stores by buying on
Copyright © 2020 American Booksellers Association