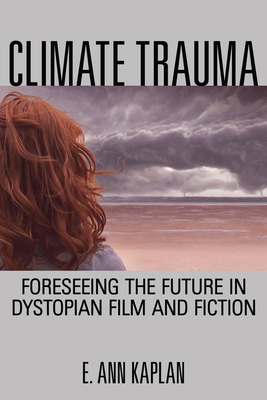 Foreseeing the Future in Dystopian Film and Fiction

Each month brings new scientific findings that demonstrate the ways in which human activities, from resource extraction to carbon emissions, are doing unprecedented, perhaps irreparable damage to our world. As we hear these climate change reports and their predictions for the future of Earth, many of us feel a sickening sense of déjà vu, as though we have already seen the sad outcome to this story.

Drawing from recent scholarship that analyzes climate change as a form of “slow violence” that humans are inflicting on the environment, Climate Trauma theorizes that such violence is accompanied by its own psychological condition, what its author terms “Pretraumatic Stress Disorder.” Examining a variety of films that imagine a dystopian future, renowned media scholar E. Ann Kaplan considers how the increasing ubiquity of these works has exacerbated our sense of impending dread. But she also explores ways these films might help us productively engage with our anxieties, giving us a seemingly prophetic glimpse of the terrifying future selves we might still work to avoid becoming.

Examining dystopian classics like Soylent Green alongside more recent examples like The Book of Eli, Climate Trauma also stretches the limits of the genre to include features such as Blindness, The Happening, Take Shelter, and a number of documentaries on climate change. These eclectic texts allow Kaplan to outline the typical blind-spots of the genre, which rarely depicts climate catastrophe from the vantage point of women or minorities. Lucidly synthesizing cutting-edge research in media studies, psychoanalytic theory, and environmental science, Climate Trauma provides us with the tools we need to extract something useful from our nightmares of a catastrophic future.

E. ANN KAPLAN is a distinguished professor of English and Cultural Analysis and Theory at Stony Brook University, where she also founded and directed the Humanities Institute. The past president of the Society for Cinema and Media Studies, she is also the author and editor of over a dozen books, including Trauma and Cinema and Trauma Culture (Rutgers University Press).

Praise For Climate Trauma: Foreseeing the Future in Dystopian Film and Fiction…

"If you’ve been following the rising tide of discussion on climate change, perhaps you’ve noticed that Hollywood has also been beating a similar drum—for years. In Climate Trauma author E. Ann Kaplan shows how movies as far back as the 1970s have depicted scenarios of future gloom tied to human neglect and mistreatment of our planet—and how dystopian films can still inspire us with hope for a better world."
— Parade

"Climate Trauma treats the subject of climate-specific pre-trauma in a thorough and interesting way."
— Foreword Reviews

"Proposing a powerful new analytic in the 'pretrauma' concept, Kaplan's fresh and insightful work goes directly to the heart of the matter:  cinema's role in negotiating a dire circumstance we humans neglect at our peril."
— Janet Walker
or
Not Currently Available for Direct Purchase
Copyright © 2020 American Booksellers Association