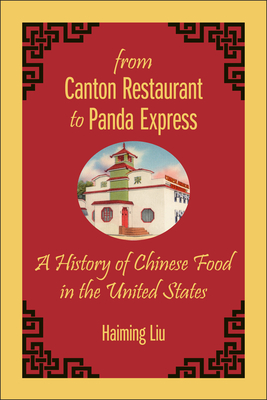 From Canton Restaurant to Panda Express takes readers on a compelling journey from the California Gold Rush to the present, letting readers witness both the profusion of Chinese restaurants across the United States and the evolution of many distinct American-Chinese iconic dishes from chop suey to General Tso’s chicken. Along the way, historian Haiming Liu explains how the immigrants adapted their traditional food to suit local palates, and gives readers a taste of Chinese cuisine embedded in the bittersweet story of Chinese Americans.

Treating food as a social history, Liu explores why Chinese food changed and how it has influenced American culinary culture, and how Chinese restaurants have become places where shared ethnic identity is affirmed—not only for Chinese immigrants but also for American Jews. The book also includes a look at national chains like P. F. Chang’s and a consideration of how Chinese food culture continues to spread around the globe.

Drawing from hundreds of historical and contemporary newspaper reports, journal articles, and writings on food in both English and Chinese, From Canton Restaurant to Panda Express represents a groundbreaking piece of scholarly research. It can be enjoyed equally as a fascinating set of stories about Chinese migration, cultural negotiation, race and ethnicity, diverse flavored Chinese cuisine and its share in American food market today.

HAIMING LIU is a professor of Asian American studies in the Ethnic and Women’s Studies Department at California State Polytechnic University, Pomona. He is also the author of The Transnational History of a Chinese Family: Immigrant Letters, Family Business, and Reverse Migration (Rutgers University Press).

Praise For From Canton Restaurant to Panda Express: A History of Chinese Food in the United States (Asian American Studies Today)…

"Liu explores the evolution of Chinese restaurants in the US as a window into global history. In short, clear chapters, the author traces the complicated paths of Chinese migrants while highlighting how both culinary insights and people have traveled back and forth between China and the US ... Highly recommended. All levels/libraries."
— CHOICE

"Haiming Liu writes with a mission: to correct a misunderstanding about Chinese food in the United States … Liu offers a refreshing spin on late twentieth-century Chinese culinary history that speaks to people interested in the global Cold War, food, and U.S. history."
— The Journal of American History

“Haiming Liu turns the topic of restaurants into a discussion of Chinese American history and explores complex issues concerning race relations and ethnic identity, as well as political and regional affiliations among the Chinese in the United States.”
— Xiaojian Zhao

"Liu exercises his considerable talents as a transnational historian to reveal the United States as a culinary crossroads where food and business acumen circulate along many paths across continents and oceans—a must read."
— Donna R. Gabaccia

"This slender book delivers its tales with lively storytelling and well-placed details, with obvious relish for the telling anecdote, and a careful folding of such into its narrative."
— China Review International

"Liu's book is accessible and impressive with is scope....Overall, the book is one of the best American Chinese food history books out there and should be read by a wide audience in the United States and abroad."
— Pacific Historical Review

"Liu perhaps makes more general readers aware that Chinese food in America is more than just a quick and inexpensive meal. It represents a rich and complex history of people, the food they eat, and the food they serve to others."
— Digest
or support indie stores by buying on
Copyright © 2020 American Booksellers Association