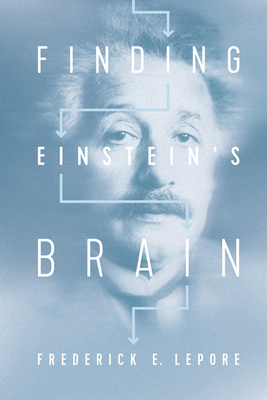 Albert Einstein remains the quintessential icon of modern genius. Like Newton and many others, his seminal work in physics includes the General Theory of Relativity, the Absolute Nature of Light, and perhaps the most famous equation of all time: E=mc2.

Following his death in 1955, Einstein’s brain was removed and preserved, but has never been fully or systematically studied. In fact, the sections are not even all in one place, and some are mysteriously unaccounted for! In this compelling tale, Frederick E. Lepore delves into the strange, elusive afterlife of Einstein’s brain, the controversy surrounding its use, and what its study represents for brain and/or intelligence studies.

Carefully reacting to the skepticism of 21st century neuroscience, Lepore more broadly examines the philosophical, medical, and scientific implications of brain-examination. Is the brain simply a computer? If so, how close are we to artificially creating a human brain? Could scientists create a second Einstein? This “biography of a brain” attempts to answer these questions, exploring what made Einstein’s brain anatomy exceptional, and how “found” photographs--discovered more than a half a century after his death--may begin to uncover the nature of genius.

"With this original book, [Lepore] gives Einstein’s brain a second life and offers the reader a rare opportunity to discover the distinctive features of a genius’s brain, while insisting on the explanatory gap that still exists between brain and mind."
— Science Magazine

"Finding Einstein’s Brain isn’t just about neuroanatomy....It also contains wonderful discussions about relativity, other aspects of physics, and the personalities of the physicists Einstein hung out with. Lepore’s writing combines erudition, unexpected asides to the reader and occasional interjections of humour."
— Brain Journal

"However often you may lose your way on this expedition across planet Einstein, it’s good to have [Lepore], a man 'of most excellent fancy' as your guide."
— Town Topics

"An extraordinary, informed and informative study that reads with the gripping attention of a riveting novel, Finding Einstein's Brain is an impressive work of seminal scholarship that is enhanced for academia with the inclusion of thirty-eight pages of Notes and a seventeen page Index. While strongly and unreservedly recommended for both community and academic library collections, it should be noted for the personal reading lists of academia and non-specialist general readers with an interest in the subject."
— Midwest Book Review

"Does Einstein’s brain (and his mind) have anything to teach us?" by Frederick E. Lepore, MD
— The Ladders

"Einstein’s Brain has a history all its own," by Melissa Drift
— Echo

"Happy Pi Day! What do you give a genius on his 140th birthday?" by Frederick E. Lepore
— The Ladders

"Very extensively referenced, chapter by chapter, inviting the interested read to delve deeper into the background on this subject. Einstein's Brain literally is a "page turner," which, for a book based on scientific material, is fairly unique."
— Journal of Neuro-Ophthalmology

"Differentiating Between the Brain of a Genius" MD Magazine interview with Fred Lepore
https://www.mdmag.com/peers-perspectives/einstein-brain/differentiating-between-the-brain-of-a-genius
— MD Magazine

FREDERICK E. LEPORE is a professor of neurology and ophthalmology at Rutgers Robert Wood Johnson Medical School in New Jersey. He is a clinical neuro-ophthalmologist, designer of the Optic Nerve Test Card, and has written over 125 scientific publications including “Dissecting Genius—Einstein’s Brain and the Search for the Neural Basis of Intellect.”
Loading...
or
Not Currently Available for Direct Purchase