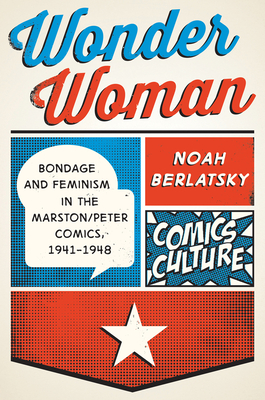 Comics expert Noah Berlatsky takes us on a wild ride through the Wonder Woman comics of the 1940s, vividly illustrating how Marston’s many quirks and contradictions, along with the odd disproportionate composition created by illustrator Harry Peter, produced a comic that was radically ahead of its time in terms of its bold presentation of female power and sexuality. Himself a committed polyamorist, Marston created a universe that was friendly to queer sexualities and lifestyles, from kink to lesbianism to cross-dressing. Written with a deep affection for the fantastically pulpy elements of the early Wonder Woman comics, from invisible jets to giant multi-lunged space kangaroos, the book also reveals how the comic addressed serious, even taboo issues like rape and incest.

"Berlatsky can always be counted on to show us new facets of what he examines, in fact, to show that the facets are part of a whole shape heretofore unperceived."
— Carla Speed McNeil

"Insightful...Berlatsky examines some of the most complex and controversial aspects of Wonder Woman. The analysis is solid, the research is thorough, and the conclusions are valid."
— Publishers Weekly


"An engaging read from start to finish, and Berlatsky’s love of Golden Age Wonder Woman comics comes through on every page."
— Comics Journal

"The research is astonishing. The dedication is breathtaking. And the fact that this would actually be usable as a college textbook in either a women’s literature, comic history, or even pop culture class is awesome."
— Comic Booked.com

"Berlatsky, the editor of Hooded Utilitarian (a comics and culture site), has written a work filled with deep scholarly insights on the history and politics of Wonder Woman's creator, as well as a larger examination of the histories, lifestyles and personal ethos that gave rise to one of popular culture's most powerful figures."
— Mic.com

"[Berlatsky] combs the verbal and visual texts to show how Marston and Peter conveyed their unique notions of liberation through bondage, submission, and the glorification of lesbian sexuality while simultaneously linking these ideas to feminism and freedom."
— Gay & Lesbian Review

"Zounds! Who knew the wonders of Wonder Woman's sadomasochistic complexities? If you only know the TV show, get ready for the ropes and lassoes and chains of the 40's comics as examined by Noah Berlatsky. Be sure to buy the e-book to see the original images in glorious color!"
— Linda Williams

Author Noah Berlatsky published an article in The Verge directly connected to the topic of the book, entitled "The crucial thing the new Wonder Woman movie gets right about the character’s history."
— The Verge