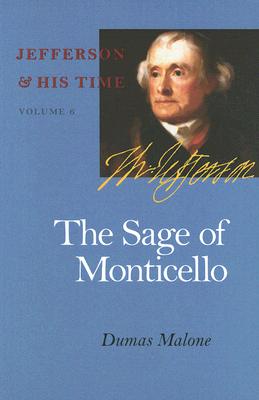 The Sage of Monticello, 6 (Jefferson & His Time (University of Virginia Press) #6)

Dumas Malone's classic six-volume biography Jefferson and His Time was awarded the Pulitzer Prize in history and became the standard work on Jefferson's life.

Volume 6. The Sage of Monticello

This final volume provides an all-encompassing account of Jefferson's accomplishments, friendships, and family difficulties in his last seventeen years, revealing his shift from the realm of politics to his roles as family man, architect, and educational enthusiast. Describing Jefferson's retirement from Washington, this volume recounts the events that formed Jefferson's final years, particularly the founding of the Library of Congress and the University of Virginia, in which he played a major role.

Dumas Malone, 1892-1986, spent thirty-eight years researching and writing Jefferson and His Time. In 1975 he received the Pulitzer Prize in history for the first five volumes. From 1923 to 1929 he taught at the University of Virginia; he left there to join the Dictionary of American Biography, bringing that work to completion as editor-in-chief. Subsequently, he served for seven years as director of the Harvard University Press. After serving on the faculties of Yale and Columbia, Malone retired to the University of Virginia in 1959 as the Jefferson Foundation Professor of History, a position he held until his retirement in 1962. He remained at the university as biographer-in-residence and finished his Jefferson biography at the University of Virginia, where it was begun.
Loading...
or support indie stores by buying on